The Sword of the Scroll 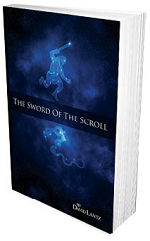 The year is 585 B.C., when kingdoms vied for world domination, and religion played a key role, just as it does in our day. On one side is the Old Testament Prophet, Daniel. On the other is the prophet of a new religion, Zoroaster, who wages Jihad to spread Zoroastrianism worldwide. These two historical figures meet when Daniel, an emissary from Babylon, proposes a marriage of political convenience between the warring kingdoms of Lydia and Media following what history records as “The Battle of the Eclipse.” Set against a backdrop of astrological events, international war and political intrigue, the two are pitted against each other in a spiritual battle not fought with human weapons, but with The Sword of the Scroll.

“The Sword of the Scroll is an enjoyable and intellectually intriguing read for any reader. Biblically inspired but also adapted to an entertaining purpose, Sword makes effective use of the conflict between Daniel and Zoroaster as a vehicle to discuss biblical concerns such as the individual’s relationship with God, submission, and ego. The war for the future of Babylon is covered throughout the expanse of the empire and even beyond its borders – Lantz is quite capable of taking the reader on an adventure with an extensive cast of characters without any confusion or break in pace. At the same time, given that the book is at its heart a political intrigue, the dialogue – an essential component of any book in this category, contrasts Daniel’s conversational style with that of Zoroaster to make the nature of the conflict more than one in which actions take place – it is nothing less than a war of wills which will fly off of the page. Whether the reader seeks a new approach to studying the Babylonian exile or a fun way to spend an afternoon, the Sword of the Scroll is sure to please.” Posted on Amazon.com. Reviewer: Todd Rainey